Gwyneth Wentink, Wouter Snoei and Arnout Hulskamp present In Code, an audiovisual performance of Terry Riley’s ‘In C’  for harp, electronics and visuals.

Gwyneth Wentink, Wouter Snoei and Arnout Hulskamp’s interpretation of In C is inspired by its very first performance in 1964; a pioneering performance (with Steve Reich among others) where live electronics and “real-time” visuals were integrated into an ensemble of acoustic instruments. During the performance of In Code a custom made lens will join the ensemble on stage. It is a special structure on which visuals are shown. In Code investigates the coherence of sound and image, creating a mix of enthralling audible and visual textures. In Code revolves around the themes of embodiment and structure, creating surprising and unexpected connections between the senses.

‘’One of the joys of In C is the interaction of the players in polyrhythmic combinations that spontaneously arise between patterns. Some quite fantastic shapes will arise and disintegrate as the group moves through the piece when it is properly played.” – Terry Riley

Terry Riley’s groundbreaking composition In C, written on a bus trip to San Fransisco in 1964, consists of one single page of 53 musical fragments. It changed the music scene. Although labelled as ‘minimal’, Riley’s music does not allow itself be easily tagged. His compositions expand the borders of genres, his curiosity constantly embracing new ideas in music and technology. ”Once you become an ‘ism’, what you’re doing is dead.”

Most renditions of this mysterious piece run somewhere between 45 or 90 minutes. It is inspired by Riley’s interest in North African and Indian music, both of which are characterised by the interaction of the ensembles and where spontaneity is key. Every performance and interpretation of In C is unique and defined by the freedom of instrumentation, number of players and the piece’s duration; which Riley leaves to the imagination of the performers.

In C holds a radical position in music history; The repeating rhythmic patterns, a fast and hard ‘pulse’, a harmonic tonal centre, ostinati (repetitions) and the concept of a process, were the guiding principles of minimal music. What began as an underground music movement grew into a phenomenon that inspired many artists and musicians such as Steve Reich, Philip Glass, John Adams, Tangerine Dream and Brian Eno.

Music can also be a sensual pleasure, like eating food or sex. But its highest vibration for me is that point of taking us to a real understanding of something in our nature which we can very rarely get at. It is a spiritual state of oneness. – Terry Riley 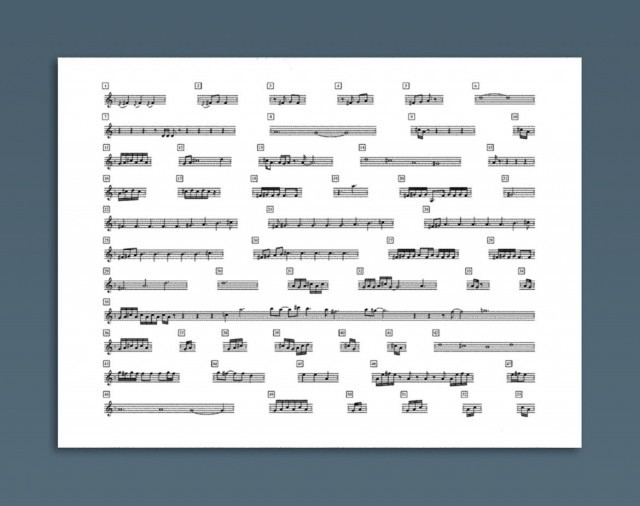 Terry Riley (Colfax, California in 1935) is a world famous American composer, performing musician and minimal music pioneer. His work is deeply influenced by both jazz and Indian classical music. In the fifties Riley regularly appeared as a solo pianist, studied composition in San Francisco and received his Master’s degree at the University of Berkeley. He was involved in the experimental San Francisco Tape Music Center, working with Morton Subotnick, Steve Reich, Pauline Oliveros and Ramon Sender. His most influential teacher, however, was Pandit Pran Nath (1918–1996), a master of Indian classical voice, who also taught La Monte Young and Marian Zazeela. Along with Pran Nath Riley he undertook many trips to India to study and to accompany him on tabla, tambura or vocals. In the sixties, Riley travelled around Europe to perform “All-Night Concerts” where he mainly played improvised music on an old harmonium and a taped saxophone. After completing his studies at Berkeley in 1961 Riley wrote his first major composition Music for The Gift. Shortly thereafter, he wrote his masterpiece In C. Its form was an innovation: The piece consists of 53 separate modules of roughly one measure apiece, each containing a different musical pattern but each, as the title implies, in the key of C. In 1971 Riley was appointed as a lecturer for Indian classical music at Mills College in California. This is where he met David Harrington of the Kronos string quartet. It was the beginning of a long-lasting association with Kronos. In June 2015 Terry Riley turned 80. He is on top of his game, still writing music and traveling the world for performances and collaborative projects. 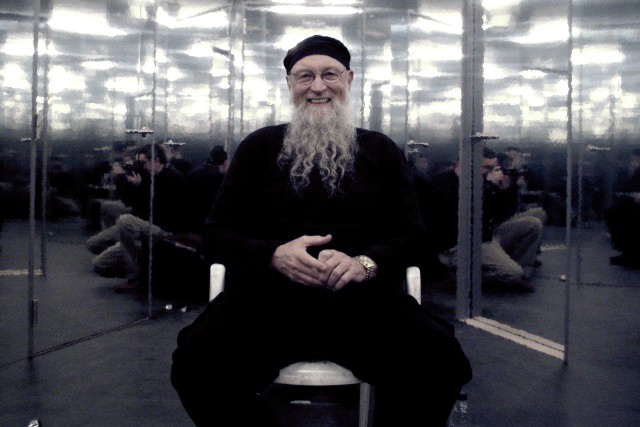 Gwyneth Wentink, Wouter Snoei and Arnout Hulskamp came together in 2012 for their first project, Canto Ostinato Audio Visual. The dialogue between sound, frequency, and image is the core inspiration for the ensemble. Coming from different backgrounds and disciplines, the ensemble manages to attract a broad audience and enjoys national and international success. With Canto Ostinato Audio Visual the ensemble performed in sold out venues such as Paradiso, the Stedelijk Museum, Club Trouw and at festivals such as TodaysArt and 5 Days Off. International, among other things, they were invited in Tokyo, Sydney, New York, New Delhi and Moscow. In 2014 they performed for King Willem Alexander and Queen Maxima during the Royal Concert. In May 2015 they were again invited to join the royal couple and to perform during their state visit in Canada. 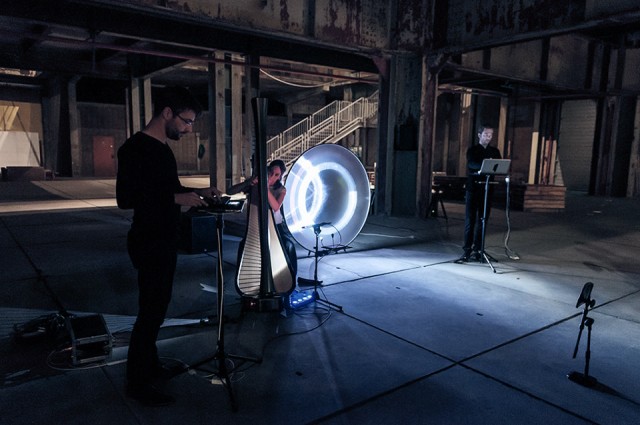 Gwyneth Wentink is an internationally acclaimed harp player and winner of, among other awards, the Dutch Music Award – the highest distinction awarded to musicians in The Netherlands – the Israel Harp Competition and the YCA auditions in New York.

Surprising choices and groundbreaking projects define Wentink’s work as a first class innovator; and have brought her to classical stages such as Carnegie Hall, Wigmore Hall and The Concertgebouw Amsterdam.

As a harpist, Wentink is something of a pioneer, creating groundbreaking productions like Canto Ostinato Audio Visual and Human Body where the harp is used as a classical instrument in an innovative way. In constant demand as a harpist, Wentink has often chosen to experiment with her instrument; playing styles that have led to profound changes in her discipline. Wentink introduced the harp into classical Indian music, and plays regularly in India with greats like Pt Hariprasad Chaurasia.

Wentink is praised for her versatility: besides initiating innovative productions and working with young composers, she is also a specialist in ancient music; she is solo harpist of John Eliot Gardiner’s Orchestre Revolutionaire et Romantique and the English Baroque Soloist. Many composers have dedicated works to her, as Marius Flothuis, Theo Loevendie and Terry Riley. Wentink played Riley’s composition “Children of Gaza ‘ in April 2014; premiered at the World Minimal Music Festival in Amsterdam.

Wouter Snoei studied at the Institute of Sonology at the Royal Conservatory in The Hague. As a composer and sound artist, Snoei specializes in working with (live) electronics, with a focus on ideas of “spaciousness”, and the bridge between acoustic instruments and electronic sound. Snoei combines his musical interests and developing software in his compositions, performances, theatre productions and installations (for example; with VocaalLAB / Silbersee, Gaudeamus, Calefax Reed Quintet, ASKO / Schoenberg). Snoei enjoys an active role in the contemporary music circuit. His background in producing dance music (Grote Prijs van Nederland) and experiences as harpist (most recently in the production ‘L’Harpe c’est moi’), have given him a prominent position in the current musical landscape.

Internationally, Snoei is involved in development of Wave Field Synthesis technology, including through the installation of Foundation The Game of Life, a revolutionary system that (using 192 speakers, 12 subwoofers and one laptop) moves sounds through space in a radically new way.

Arnout Hulskamp (1978) studied at the HKU and made his name with his self-developed software Open Wound, which enabled him to compose expressionist glitch-imagery. His idiosyncratic work earned him a VJ residence in TrouwAmsterdam, as well as many performances worldwide with big names in the progressive electronic music scene; such as James Holden, Henrik Schwarz and Trentemøller.

Since 2013 Hulskamp has worked with Christopher Gabriel; going by the name, ‘Children of the Light’. The duo designs scenography that uses light, mist, scenery, reflections and animations to create abstract landscapes. One of the highlights of this cooperation is the groundbreaking ‘Mirror Moon’ installation, which Children of the Light developed for Nicolas Jaar’s band, Darkside. Performances at Le Trianon (Paris), the Amsterdam Dance Event in the Concertgebouw, and during Art Basel Miami, led to a wildly positive reaction. Those in the know saw the show as game-changing.

Hulskamp also operates outside the performance circuit. Hulskamp makes installations and works for clients such as Rabobank, the Haga Hospital, the Zuiderzee Museum and TEDxAmsterdam through ‘aaiqu’ (All art is quite useless) Hulskamp’s own platform for interactive lighting and video work. He has twice received the Gouden Reiger for his work.

In Code is a production and initiative of State of the United Arts.